I really don’t need to write to you about this ministry of giving for the believers in Jerusalem.  For I know how eager you are to help, and I have been boasting to the churches in Mascedonia that you in Greece were ready to send an offering a year ago.  In fact, it was your enthusiasm that stirred up many of the Mascedonian believers to begin giving.

But I want it to be a willing gift, not one given grudgingly.  You must decide in your heart how much to give.  And don’t give reluctantly or in response to pressure.  For God loves a person who gives cheerfully.  And God will generously provide all you need.  Then you will always have everything you need and plenty left over to share with others.  Yes, you will be enriched in every way so that you can always be generous.

And when we take your gifts to those who need them, they will thank God.  So two good things will result from this ministry of giving—the needs of the believers in Jerusalem will be met, and they will joyfully express their thanks to God.  As a result of your ministry, they will give glory to God.

Second Corinthians 9 speaks of the ministry of giving.  From that chapter I have selected several verses.

Ten percent of the profits from the intended ministry of the eBook, Steps of a Servant, will be distributed to selected Bible believing churches in America and in Jerusalem for their disbursement according to the directives of the Scriptures.

Also included in the ten percent profit distribution will be a ministry for the disabled, Joni and Friends. 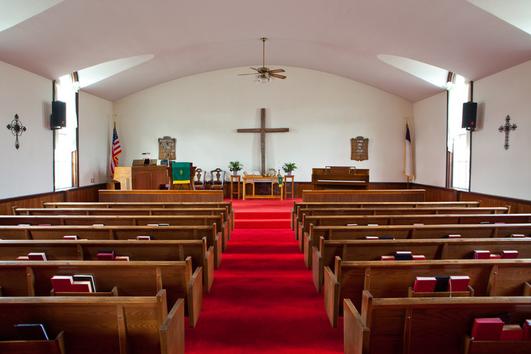 What Happened When Two Judges Met
By Dr. Walter L. Wilson
A TELEPHONE call came to the office one day, and upon answering it, a woman’s voice asked:  “Could you spare the time to meet my father at the L—Hotel tomorrow?  He lives out of the city and will come in on the bus line if you will give him a little of your time.  He is very anxious to see you about an important matter, but being old and rather feeble, he feels that he cannot go out to your office.”

This seemed to be a call from God, and I was happy to answer that it would be a pleasure to meet her father at whatever hour `he might find it convenient to come.  “At two o’clock in the afternoon would be the best time,” she said, so this arrangement was agreed upon.

The next day I called at the hotel and found, sitting in the lobby, a very old gentleman, having a long white beard, beautiful white hair and large bushy eyebrows.  I approached him and asked whether he was waiting to see someone, to which he replied that he was waiting for the doctor who had promised to meet him there at two o’clock.  After introducing myself to him, we followed his advise and found seats on the mezzanine floor where we could be alone for our conversation.

“My name,” he said, “is Judge A--.   I have been a judge in the County court at M—(a city not far from Kansas City) for many years.  I am an old man as you can see, and have sent many men to the penitentiary.  I am now nearing the end of my own life and I know quite well that the great Judge of all the earth will send me to His penitentiary, for I have not been a Christian nor made any provision whatever for the sins that are recorded against me. I have come to you, doctor, to see if there is any remedy for an old man whose life has been spent in worldly pursuit, with no fear of God and no Christian training.”

It was interesting to observe, with mingled feelings, that here was a life spent in service of his fellow men, enjoying the blessings of God, but untouched by the grace of God and unmoved by His goodness.  I could see that the judge was not trifling.  He was in real earnest.  Life at eighty is not full of foolishness. Things more serious occupy the mind and heart.  The judge was facing death and after death the judgment. (Heb. 9:27.)

The one who had judged others realized that now he must be judged himself.  He knew that the record was filled with sins of every kind and character.  He remembered that no one had been engaged to defend him at this great bar of justice.  He was aware of the fact, too, that no provision had been made for the pleading of his cause; and he realized that there were no extenuating circumstances which could be presented to the Judge for the willful sins of many years.  He felt his case was hopeless.

Taking my Bible, I turned to John 5:24.  Here we read those wonderful words:   “Verily, verily, I say unto you, He that heareth my word and believeth on him that sent me,  hath everlasting life, and shall not come into judgment;  but is passed from death unto life.”  As those words were read slowly: “Shall not come into judgment,”  the judge became very attentive.   His curiosity was aroused at once.  “I never heard those words before,” he said.   “What is the meaning of the passage? Is it possible that a sinful man may escape the judgment?”

My aged friend was quite familiar with judgments, courts and trials, with all the accompanying evidence and arguments.  These subject had been his portion for many years.  It was the judgment he feared and which he wanted to escape.  No wonder these five great words from the lips of the Lord Jesus stirred his soul with a wonderful hope.  His whole desire now was to know how this statement could be true in his case.

In order to explain the passage and answer the question, I chose Colossians 2:14, where these words are recorded:  “Blotting out the handwriting of ordinances  that was against us, which was contrary to us, and took it out of the way,  nailing it to his cross.”

“Judge,” I said, “you will understand of course, that where there is a plain case of guilt and the evidence is undeniable, the only escape for the defendant is that someone will pay the price.”

“Yes, I understand that perfectly; but where can I find one who will pay my price?”

“Oh,” I replied, “that is the story of the last Scripture we just read.  Christ at the cross was paying your price.  Because He was a sufficient Saviour and was acceptable to God for you, God let Him die for you at Calvary, taking your punishment, bearing your sin, becoming guilty of your wicked ways and evil deeds.  There He died in your room and stead that you might go free.”

The old gentleman was in a deep study by this time.  I could see that his heart was greatly affected by this new revelation of a substitute in the judgment.  His eyes were closed under those great bushy eyebrows, and as a I placed my hand on his I felt that his body was trembling with emotion.  He looked at me shortly and said, “Did He do that for me, doctor?”

With a trembling voice filled with emotion, he answered, “Yes, I will gladly trust Him.  I never knew before that God had sent Him to die in my place, to take my punishment, to suffer for me.   I thank Him for it.  I believe His word.  He said it and it must be so.”

I knelt beside the chair, holding his hand in mine, and with deep gratitude praised the Saviour for His wonderful love, thanked God for His gracious work, and thanked the Holy Spirit for revealing the Saviour to this aged sinner who had sought and found the Saviour.

Do not wait, my friend, until you are eighty.   Trust Christ now!   You may never have the opportunity which God gave the old judge at his advanced age.   This judge met his JUDGE, and the records were cleared before the judgment day.   You do this, too!
View on Mobile